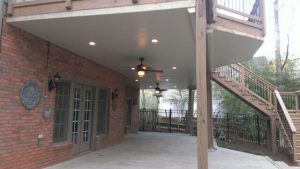 In simple terms, cantilever is the part of a deck that extends past a structural beam. A cantilever allows for enlarged square footage of the deck and also more creative design. Many of our customers ask whether it is possible to put an underdeck on a cantilever, and the answer is yes!!

Usually, the structural beam that the cantilever extends passed is made up of two 2×10’s sandwiched together. This effectively divides the deck into two fields. Rather than drop below this, we treat it as two different systems. The main body of the deck runs out and away from the house with the gutter mounted to the inside face of the drop beam. The underdeck section on the cantilever is run backwards, with the second gutter on the outside face of the drop beam. 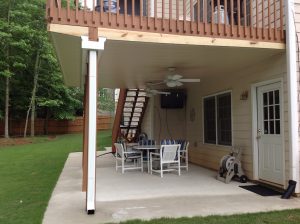 A few things should be considered; occasionally, the deck joists are doubled up and laid over the drop beam. This criss-cross often creates a small channel through which water can run and bypass the underdeck. If your deck is under construction, this issue can be headed off by simply laying flashing or a membrane over the beam before the joists are laid down. If your deck is already built, it may be necessary to take up deck boards and put individual flashing sheets on the joists where they cross the beam. You SEUD sales rep can walk you through this in more detail.

These structural deck elements create unique design features in the underdeck space. If your deck is built with a cantilever, don’t worry—we’ve got you covered! 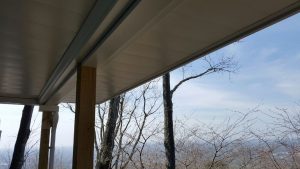