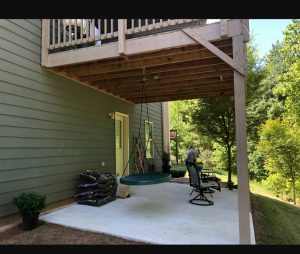 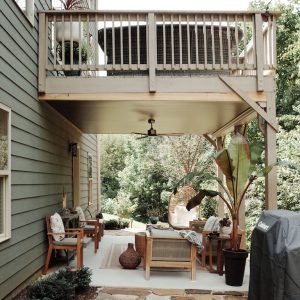 Sometimes the simplest things can make the biggest impact. Not every home remodel needs to break the bank, not every renovation is a total overhaul. Often, minimal changes that are well-thought out make the most drastic differences in how a space looks. Take this project that started with a modest sized sitting area that didn’t see much use. On a dry day, it could be utilized as a sitting area with shade, but it didn’t offer much in the way of feeling inviting. Rather than tearing down the deck and starting from scratch, going in for thousands and thousands of dollars, the homeowners opted to work within the constraints of the original framework.

The results, which we will showcase over the next several days, speak for themselves. Right off the bat, the mere act of adding a ceiling created a finished look that spurred on other creative additions to the space, taking the space from a catch-all outside of the basement to a Havana-inspired lounge that invites you for long stays in the fresh air right outside the door. A few other design features of this project make it pop, but you’ll have to come back this week to find out more. Til then, have a great day!!